The shadows and the golden glow of the scene easily reveal the time of day. Just a few moments after sunrise, this MD-83 climbs away past Mt. Rose (just south of Reno Tahoe International) at the start of an early morning flight to KDFW.

Brian Swogerלפני 7 שנים
A gorgeous picture of Mt. Rose, betting on medium level winds on climb out (look at the blowing snow at 12K on Mt. Rose!). Reno, the US Wind Tunnel!
Report

Gary SchenauerPhoto Uploaderלפני 6 שנים
To ALL FA Viewers:
Earlier today, I was notified by a friend to check this photo and I discovered it had gone over the "120,000 views" total. I also discovered that when the view totals of just my top three pictures are added together, those 3 totals exceed one-quarter of a million views.
I am astounded ... and I am extremely grateful. In over six years, I have posted less than 400 pictures into the gallery so I am stunned that just three of them, when totaled, have received over 1/4 of a million views. And I have no one to thank except the 120,000 people who have looked at this photo, the one-quarter of a million FA viewers who have checked out my three pictures, and of course, the super folks at Flight Aware. It has been the wonderful people of FA who have accepted my pictures free of charge (I know a person who pays to get pictures posted on another site). And it has been the people of FA who taught me about aviation photography and who have aided me in improving as an amateur photographer. I owe 100% of my abilities to FA, and although I remain just an amateur (I never have, nor will I ever, take $ for any photos I snap, but just this year alone I have freely given away thousands of pictures taken at aviation events accompanied by a full photo use photographer's release), I know my photo quality has improved a little since this one was submitted. And I owe so much to FA that I could never repay, so I'll simply say that FA "made it happen" for me and ... Thank You to all.
Report

Mathias Böttcherלפני 6 שנים
it`s hard to weigh, photo or plane, both should convince with you everything is very exact,
Congratulations, Gary -
Report

sam kumineczלפני 5 שנים
Gary...I just forwarded your comment thanking FA for posting your photo...
I sent it to Daniel and Jessica...
if they respond ill send it to you
Report

Gary SchenauerPhoto Uploaderלפני 5 שנים
Just went over 125,000 "views." It was only a few months ago that it went over 120,000, and now 5,000 more folks have viewed it. Thank you to all who have viewed this snap; thanks to Brian, Mathias, Craig, and Sam for your comments; and TYVVM to everyone in the FA organization.
... Most Appreciatively, Gary Schenauer
Report

Greg Byingtonלפני 5 שנים
Well, it is just a darn nice photo! You have good background (a little wind on the mountain helps), good composition, good light, a good looking airplane and livery, and good timing (the plane's gear is up). What's not to like? So, the views and votes are much deserved.
Report

Jon Jefferiesלפני 5 שנים
I flew these aircraft for AA for over 23 years and loved going into RNO and out of there, too. Outstanding shot! I use it as my computer screen background.
Report

Gary SchenauerPhoto Uploaderלפני 5 שנים
Howdy, Jon and AAFlyer, and many Thanks to you both for commenting.
You two may enjoy reading a blog article I wrote about a half-year or so ago. (I occasionally write for an east-coast-based site.) The article contains several snaps of AA Mad Dogs. (I have tons of shots of AA 80s; I've flown in them as a pax and I love them.)
I'll find the link to the article and then you can give it a click. And BTW ... When reading the article, click directly ON the photos to see the full-sized versions pop open. And if you ever want ANY of my pics, just let me know. My photos are ALWAYS free to anyone who asks for them.

Gary SchenauerPhoto Uploaderלפני 5 שנים
8:15 AM here in Reno on April 29, 2016 >>> What can I say now that I have not already said in previous entries? How do I express to the FA staff and to the thousands of FA members how deeply appreciative I am? One hundred thirty three THOUSAND views of my picture! 133,000! For just this ONE picture!
..... Thank you to all! When I posted this pic six years ago, I could not have foreseen that it would ever be viewed so many times. Thank you all very, very, VERY much!
Report

Gary SchenauerPhoto Uploaderלפני 5 שנים
Several months ago, I tossed a reel of extremely old 8mm movie film into the trash. I had filmed those movies 49 years ago (way back in 1967) when I was 17. Taken primarily at KBUF but also at other airports (Boston, JFK, Newark), the movies were all about mid-60s commercial airliners. As the trash pick up truck was coming down the street, I happened to comment here on FA that I had thrown the movies away because I had no way to view them anymore and also that they were severely faded, hopelessly brittle, and "unsalvageable." Within moments, replies to my comment were posted urging me not to discard those movies, so I raced outside and dug thru the trash. I retrieved them as the trash truck was only a few homes away from mine. Numerous viewers said that the movies could be salvaged and offered suggestions on who to send them to, etc. I thought it would be impossible to salvage anything from them.
.... Yesterday evening, the "impossible" happened. A very (-VERY-) brief segment of one of my old movies from that reel, showing a Delta Airlines Convair 880 in the classic "Widget" livery at JFK in 1967, was posted to You Tube. It is the first of what will be many short, but viewable, segments that will be posted in the future.
.... I need to say "Thanks" to the following FA members: Greg Byington, Mark Thomas, Mark See, Cliff Goodwin, Dwight Hartzje, Uwe Zinke, Mathias Bottcher, Skyhawkrg, AAflyer123, Dave Sheehy, Sam Kuminecz, Sam Pierce, and Tom "Alien" Vance. I also need to say "Thank You" to two staff personnel in the FA organization: Ryan Jorgenson and Daniel Baker. And I need to acknowledge four more people who are not affiliated with FA, but without whose support the old movies would not be viewable: Christian Bryan, Dave Goodwin, "Calamity Jane," and "Blue Yonder." Had it not been for the above named people; each one a wonderful friend and a true lover of aviation history; those old movies would no longer exist. I came soooo close to tossing them in the garbage in the belief that after a half century of hauling them around in an old brown box, they had deteriorated into junk. I never knew they could be saved.
.... I posted a link to the first segment, resurrected and posted on You Tube by Mr. Christian Bryan, below. It is extremely, extremely brief (less than one minute) .. but .. it is viewable. And thanx to those named above, there are more to come. :-)

Greg Byingtonלפני 5 שנים
Gary, you're welcome, and man I'm glad you didn't throw that film away! I just watched the video (twice) and it is really cool! (There's a 60's term for you.) Thanks for putting it up there for folks to see. It does bring back memories, and I can't wait to see more. Oh, and if I didn't mention it before, I also enjoyed your article on the Mad Dogs. Keep up the great work, eh!
Report

Mark Thomasלפני 5 שנים
Just watched that Convair 880 video… absolutely priceless! You were a lucky kid to have that equipment in 1967! 10 years before my young spotting days at Heathrow but it brings back memories just the same. Can't wait for more Gary. While I'm here, if you didn't read an earlier comment and you are still coming East, there's a steak dinner for you if you come North of the border. Just let me know!
Report

Gary SchenauerPhoto Uploaderלפני 5 שנים
Hiya, Mark. :-)
....
Movie is really LQ but at least it is viewable. That camera was second-hand, but back then, a 17 year old kid operating on paper route money was grateful to have it. (Grin)
And I'm certainly grateful to you now for the dinner offer. I'll definitely let you know if I will be crossing over the Peace Bridge or the Rainbow Bridge from WNY to Ontario during my trip back east. Unless my P/port arrives in time, I can't cross so at this present moment I had no plans of going up to WNY. But your offer is graciously appreciated. (Wave)
Report

Mark Thomasלפני 5 שנים
Hi Gary, just saw the videos. The quality is just fine. It's not 4K is it? But it's viewable and that's the main thing. It's amazing there's images on that brittle film to salvage at all! There are comments there from people who truly appreciate the effort made to restore this film. It brought back memories for some going back to their childhoods. This is priceless, absolutely priceless! The wave from the cute flight attendant was excellent. I wonder if she'll see this and remember that day when a seventeen year old kid was hanging around taking videos, that would be cool!
Report 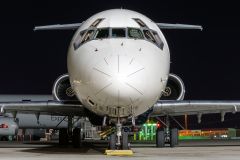 iFlyGr8לפני 5 שנים
How is this Nasty? This is a wonderful photo. From.the stuff that you post, it looks.lime you should take a page out of Gary's book and learn how to use a camera. And to everyone else, just ignore this troll.
Report 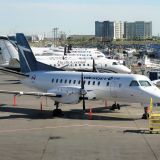 Isaac Vogelzangלפני 4 שנים
Beautiful, I saw this picture in an edition of an "Airways" magazine!
Report

Ned Gehringerלפני 3 שנים
Still Stunning and wears well as a classic shot. I can FEEL the cold wind hitting me looking at this perfect picture...
Report

Viv Pikeלפני 2 שנים
Over 168,000 views. Not too shabby of an achievement ... A great pic deserves the accolades ...
Report

Kobe Hunteלפני 2 שנים
gosh i wish i could get a photo over 50k! not nearly 200k!
Report

Lonnie Pennerלפני 2 שנים
You have some exceptional photos Gary. And i tip my hat to you for that. I also tip my hat to you for trying 50 times at jp. I would have given up after 5. And as far as not taking payment for your work, that is your call, but your photos definitely deserve it. I wish i lived close to a large airport so i would have more opportunity to photograph airplanes, but... So, thanks for sharing.
Report 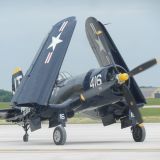 Viv Pikeלפני שנה
Hi Gary - I just thought I'd mention it, your 5 "most viewed" photo's have now accumulated a combined total views of well over half a million views (530,000 and counting). Congrats, and keep up the good spotting. Much appreciate your efforts. *wave*
Report