Gary SchenauerPhoto Uploaderלפני 2 שנים
A capture I never, in my wildest dreams, expected to get. I owe so very many people more than just a Thank You for making it possible for me to be at the taxiway to click my first-ever Antonov An-124 taking off just one runway over from my position. Superb!
Report

Gavin Hughesלפני 2 שנים
Lucky to have that network and a good result from it.
Report 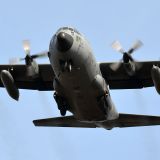 Bobby Allisonלפני 2 שנים
That is awesome! I still kick myself for not making a 3-hour drive to catch it when it came into TUL once.
Report

smoresiלפני 2 שנים
Nice shot Gary. Do you have any of the immense dust plume he kicked up running up those Progress turbofans at the end of the runway?
Report

Gary SchenauerPhoto Uploaderלפני 2 שנים
Gavin, Bobby, and Smoresi ... I appreciate your comments. Thank You to each of you. Smoresi ... I was max-zoomed-in on that VERY amazing dust & dirt cloud. The high winds blowing it high up and away to the east really made it even more intense. And then, when the Southwest came right toward it while landing on 34R, I was clicking the entire time from as it approached and flew just over the dust until it landed and stopped right next to me at Juliet. One-of-a-kind series of pics. (BTW, the Southwest pilot was, let's just say, "somewhat aggravated" (to put it politely) by having to fly into that haboob-style dust cloud.) I do have many great clicks, but I regret to tell you that I do not share such unique photos as those in FA's gallery. Most likely, if you have been an FA gallery viewer or contributor, you already know why. (Same reason I won't be sharing that closeup shot of Tom Cruise waving to me from the back seat of the F-18 as it went right by me while landing during the filming of the new TG movie.) I do share such photos, but only to those on a specific email list who have properly responded to my frequently-made offers. I am sorry. However, I did see some other folks taking pics on cell phones. I'm not sure how good their long, long, long distance cell phone pics might have come out, but if I happen to meet one of them I'll definitely try to let you know. (Wave) (PS - Watch News 4 at 6 tonight. This photo will be used on the "Ask Joe" segment.) Bobby ... WoW!! Your pics are beyond exceptional; they are phenomenal. You could be posting these on one of the snob sites (ie: JetPhotos, etc.). A long, long time ago (before joining FA), I tried contributing to a snob site --- many, MANY attempts. Then I heard about FA. FA not only accepted my submissions, but encouraged me and even offered advice. It is solely Thanks to an FA employee that I am now a fairly good amateur digital photog. And that is why I have always stayed as loyal as possible to FA. But as you may have noticed, FA's "Photo Gallery" operation does have some serious "deficiencies." (That's why I don't put any pics that might be described as special or unique, etc.,.) Might I suggest you submit some of your pics to a site like JP or A.net. You won't find anything like you find here on a site like theirs. They don't tolerate thieves, anonymous trolls, mass junk pic submissions, etc. And they DO enforce their standards (which, you have probably noticed, does not really happen here). I think you'll find that your pics will find a more appreciative audience. A huge number of GREAT photogs here just like you, but also a goodly number of the other end of the spectrum. Just a suggestion ..... (Tip of my Spotter's Cap to you)
Report

Gavin Hughesלפני 2 שנים
Hey Gary and all others who are p....d at plagiarized photos. If you find any, click on the 'Report this photo' button and put in the details of the copyright. They seem to be taken down fairly quickly - no one wants to be sued for copyright infringement. I did one this morning (my time) and it was gone in less than 15 mins, but that's probably more luck than how quick FA is. Our 'friend' in Canada only has about 5 or 6 in his gallery. I haven't attacked any of them myself, but it would be interesting to see if his gallery can get emptied of the plagiarized pics. Might give him a message.
Report

Incredible photo......Way to capture with Reno's majestic mountains in the background !!
Report

Mark Kuldaלפני 2 שנים
That was awesome!!!!! Thanks so very much!
Report

jim garrityלפני 2 שנים
I think they know how well you take pictures, and just wanted to get in on the action? Another great shot Gary!
Report

Gary SchenauerPhoto Uploaderלפני 2 שנים
Daniel Jef commented, "Nice pic but please put the pictures in by registration numbers!!" (The double exclamation marks were put there by Mr. Jef, indicating that he was commenting in a very stern manner.)

@Mr. Jef .... What on earth are you talking about? The registration number is right there in plain view on the side of the Antonov, and I entered it in the correct box when I posted this photo 21 days ago. The registration is RA-82043. It is right there in big black letters and numbers under the picture. So might I suggest wearing glasses? And might I also suggest that you worry about your own photos and not lecture me on how I post mine. Especially when I have posted mine properly -- three weeks ago. I have never lectured YOU about how you post your pictures; in fact, just last week under your picture of the B727 I paid you a very high compliment. You even acknowledged my comment. But you apparently read my compliment and decided that my compliment qualified you to become my "teacher?" Sternly telling me to do something that I already did -- three weeks ago -- makes you look a bit confused ... and somewhat blind. Maybe you should just stick to taking excellent pictures as you have always done. (Wave)
Report